On Sunday 4th September 2022, James Russell was formally inducted as the Assistant Pastor of Ballymena Baptist Church during the evening service.

During the service, Pastor Curry interviewed James about his Christian walk and call to ministry. James outlined how he had been brought up in the church and came to faith at an early age. Following university, James trained to be a worship pastor in England and then served in that role at a church in Belfast. During this period, he began to feel a call to pastoral ministry and started to consider options for training. He took up the role of pastor-in-training at Charlotte Chapel in Edinburgh where he served for three years alongside studying at Edinburgh Theological Seminary. James explained that his aspirations for his time among us were that he would be a faithful servant; that he would faithfully teach God’s word from the pulpit and in the homes of members and that he would be an encouragement and example to the members of the congregation. He asked for the church’s prayers as he ministers among us.

After the formal act of induction Stephen Russell, James’s father and one of the elders of the church, prayed for him and his wife Emily. Andy Paterson, associate pastor of Charlotte Chapel, brought greetings from Charlotte Chapel and paid tribute to James for his time there. Andy then preached from Paul’s sermon to the Ephesian Elders in Acts c

hapter 20 and left James and the congregation with several reminders:

Andy Paterson closed the service in prayer. The service was followed by a time of fellowship over supper, allowing the congregation the opportunity to greet James and Emily. 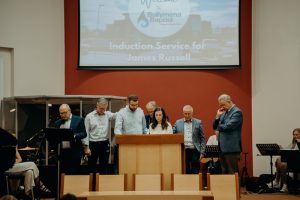 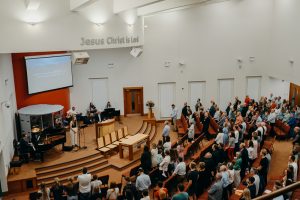