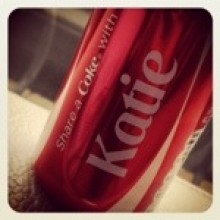 Call me a cynic, but I wasn’t impressed when I first saw Coca-Cola’s new advertising campaign. ‘Share a Coke with a friend’? Who would want to share a Coke? Surely this was going to backfire hugely.

Instead it has been incredibly successful. Partly because I was right: people don’t share a Coke with their friend, but when they find one with their friend’s name on they will at the very least take a photo of it. These photos will then be texted, tweeted, instagrammed and facebooked, reaching an ever widening audience.

More than just taking and sharing photos, though, people are actually buying the product, too. Several of my friends have done this, either drinking the Coke and giving the friend the empty bottle, or buying a bottle they never intended to and giving it as a gift. Over the course of a few weeks, one friend managed to find every name in her office. She took pictures of her colleagues with the bottles and posted a collage of them on Twitter.

I haven’t seen ‘Jennie’ on a bottle (yet!), but I know I’ll get a buzz of pleasure if someone sends me a picture of one. I know it’s a marketing ploy, I know the Coca-Cola executives weren’t thinking of me when they crafted that label, but I will still feel special, noticed. Noticed by the friend who sees the bottle, thinks of me, takes the picture and sends it; but also, irrationally, noticed by the Coca-Cola Company.

What Coke have managed to tap into is that, regardless of how we feel about their product, we like other people and we value relationship. And we love to be noticed, because being noticed makes us feel significant, and ‘Am I significant?’ is one of those deep questions that will not go away. A product that answers that question with a resounding ‘yes’ is bound to be popular, and if it can do it while encouraging sharing and altruism rather than, like a certain cosmetics line, by promoting self-regard (‘Because you’re worth it’), it’s onto a winner.
Yet this ‘hit’ of recognition is fleeting at best. Our yearning to be known and to be significant is not satisfied by finding our name inscribed on the side of a plastic bottle. It is satisfied – only and eternally – by finding our name inscribed on the heart of God.

Jennie Pollock
Jennie Pollock is a freelance writer and editor. She blogs at http://jenniepollock.com and tweets as @missjenniep.